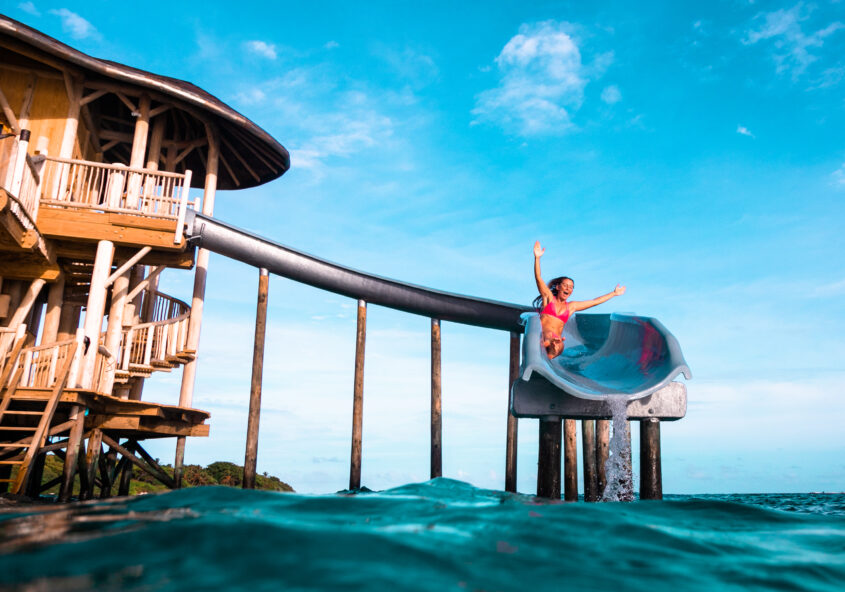 Pioneering luxury resorts brand Soneva has announced a spectacular festive calendar across its award-winning destinations in the Maldives and Thailand for December 2022. For guests at Soneva Fushi and Soneva Jani in the Maldives and Soneva Kiri in Thailand, this holiday season will be a time to reconnect with loved ones and revel in the magic of the festivities. Rare, one-of-a-kind experiences will create a lifetime of precious memories: exquisite dining from Michelin- starred chefs, festive feasts, world-renowned wellness specialists, sporting legends and an exciting holiday programme for children of all ages, as well as a special visit from Santa himself and one of the world’s best mentalists, Lior Suchard.

In true Soneva tradition, the iconic New Year’s Eve Journey around each resort will see out the year in awe-inspiring style – with sumptuous dining, live music and unforgettable entertainment.

Exceptional seasonal dining sets the scene for a magical Christmas and New Year at Soneva Fushi. British chef Timothy Bilton will be bringing a taste of Yorkshire to the Baa Atoll, while Danish chef Anika Madsen will be demonstrating her personal approach to gastronomy. Also visiting the Maldives this December is Swedish chef and restaurateur Paul Svensson, who recently launched Studio 2000 in Stockholm – an edible experiment that strives to disrupt the food system and change the way we think about land use, soil health and flavour.

On Christmas Eve, guests can celebrate the night before Christmas with an intimate but mind-blowing performance by world-renowned mentalist Lior Suchard, who will be taking guests on an incredible journey through the wonders of the human brain. A Christmas tree lighting ceremony will take place on the Soneva Fushi Sandbank at sunset, with carols, eggnog and mulled wine. Later that evening, there will be an extravagant Christmas gala dinner at Mihiree Mithaa, with cooking stations and festive entertainment from a live band.

Christmas Day starts with festive tunes and family games at breakfast time, followed by a visit from Santa to deliver presents and start the celebrations in the Baa Atoll. A light Christmas lunch will later be served at Out of the Sea and Out of the Blue.

Helping guests stay active throughout the festive season, former England international footballer and television pundit Graeme Le Saux will be hosting a series of football camps at Soneva Fushi. Former world number one tennis doubles and number four singles player Jonas Bjorkman will also be making a welcome return to the Baa Atoll to offer one-on-one coaching on the beautiful jungle court. For guests wanting to relax, unwind and re-centre over the winter holidays, Soneva Fushi’s resident yoga guru Pawan Kumar and expert team of international wellness specialists will be at the resort throughout the winter season at Soneva Soul.

Younger guests can embrace the festive fun with an exciting programme of Christmas- themed activities and experiences at The Den, one of the largest dedicated children’s zones in the Maldives. In the lead-up to Christmas Day, there’ll be Christmas tree decorating, carol rehearsals, festive baking, letter writing to Santa and crafts galore. On Christmas Day, Soneva Fushi’s youngest guests can take part in carnival games, make a splash at the Christmas pool party, try their hand at making mocktails, or explore the wonders of the stars above during a night-time Christmas camp. Throughout the holidays there will also be family treasure hunts, classic movie nights, sunset dolphin cruises, stargazing DJing workshops for teens, and a chance to compete in Junior MasterChef.

As part of its ongoing commitment to ensuring that younger guests stay inspired and intrigued outside of term-time, Soneva has also partnered with Oppidan Education, a British-based mentoring firm created to help children continue their learning outside of the classroom and reach their full potential. As well as complimentary drop-in workshops with fun, educational activities at The Den, Oppidan will also offer private, one-on-one appointments, which can be scheduled each afternoon.

As 2022 draws to a close, Soneva Fushi’s spectacular New Year’s Eve celebrations take guests on a So Global So Local gastronomic journey. A tantalising feast for the senses, the journey winds its way along torch-lit paths to mouth-watering live cooking stations and magical live entertainment. The evening culminates with a countdown to 2023 and a dazzling light show to welcome in the new year – followed by a live band and DJ spinning tunes into the early hours.

An array of fine, festive dining experiences awaits guests at Soneva Jani, alongside an exceptional line-up of visiting chefs through the Soneva Stars calendar. Timothy Bilton, Anika Madsen and Paul Svensson will all be hosting exclusive dining events at So Engaging, the intimate chef’s table that seats just five guests.

The seasonal celebrations start early on Christmas Eve, with a delectable mushroom steak and truffled egg breakfast served at sunrise or in-villa for guests. Later in the afternoon, Santa will be making an appearance at The Den to spread the Christmas cheer. Sunset cocktails will be served at the So Sandy beach, followed by an indulgent Christmas Eve dinner on North Beach, with live entertainment and a DJ.

On December 25, the festivities start with a Christmas morning breakfast and brunch at Down to Earth or, for late risers, an extended Christmas Brunch at The Gathering, while a Mini Brunch will be held at The Den for Soneva Jani’s youngest guests. The celebrations continue into the afternoon at South Beach where a DJ and saxophonist will be providing the soundtrack to the setting sun. In the evening, guests can awaken the senses with a set menu carefully curated to the classic movie Le Chef under the stars at Director’s Cut. For younger guests, Ratatouille will also be screened.

Families of all ages and sizes have plenty to look forward to at Soneva Jani’s all-new two-storey Den. Featuring a zipline through a cascading waterfall, areas for music, Lego, dressing up and creativity, a soothing sensory room for toddlers, and a hidden hangout for teens where mocktails and music set the scene – there’s something for everyone at The Den. Young Sonevians both large and small can join in the Christmas fun with ornament and cupcake-making, carol rehearsals, Christmas-themed movie nights

and more, as well as ocean bingo, an island treasure hunt and mocktail masterclasses followed by a pool party for teens. The experts from Oppidan Education will also be making a welcome return to offer one-on-one mentoring sessions to Young Sonevians, as well as fun complementary activities.

Following his visit during the Easter holidays, Soneva Stars regulars Mikaël Silvestre will be returning to the Maldives in December during the festive break. The former French international football player will be hosting his ever-popular children’s football camps for Young Sonevians.

And at Soneva Soul, Soneva Jani’s resident yoga and meditation masters, Justin and Kamal, will also be hosting complimentary morning yoga, meditation and Pranayama sessions throughout the festive season.

To mark the end of 2022, Soneva Jani’s New Year’s Eve Journey takes guests on a gastronomic voyage of discovery. Starting with Champagne and canapés on the Arrival Jetty, it follows sparkling paths around the island to discover live cooking stations and magical entertainment along the way. The evening culminates at South Beach, with a countdown to 2023 and a breath-taking fire show to see in the new year, followed by a live band and DJ playing late into the night. 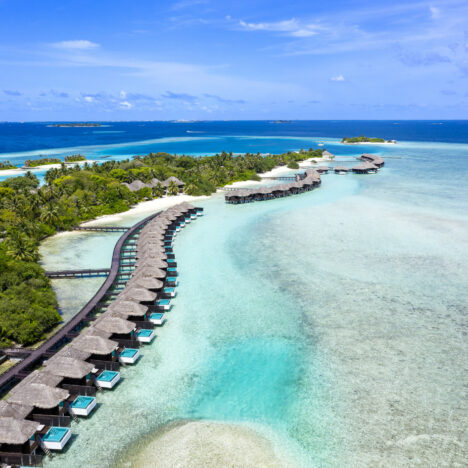 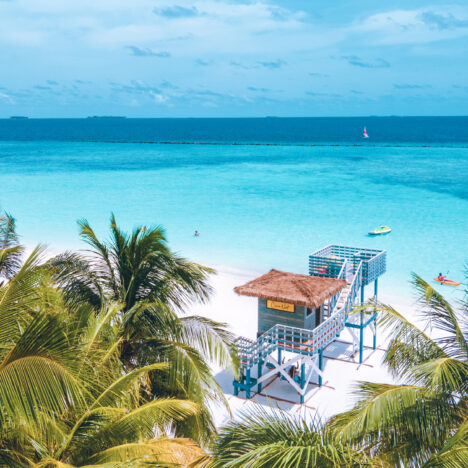 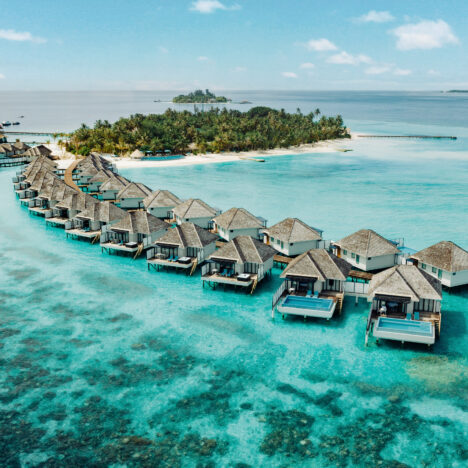